From the Experts: The Inside Scoop You Need into 3 Blue Star Museums

Is your family currently stationed in Georgia, Ohio, or Virginia? And you’re trying to figure out which Blue Star Museum you should pay a visit to next?

If so, we’ve got a special treat for you today. We asked museum experts from three historical sites—Flint RiverQuarium, MAPS Air Museum, and The Weems-Botts Museum—to share the inside scoop you need into these particular historical sites!

First up? Wendy Bellacomo, Marketing Manager of Flint RiverQuarium, dives into the five fascinating creatures not to miss during your visit.

When you visit, you’ll experience the unique ecosystems of the Flint River watershed through a variety of interactive exhibits featuring more than 100 species of native aquatic life. Meanwhile, the aviary gives visitors an up-close look at a range of both native and migratory birds found in the surrounding wetland habitat.

On Fridays, Saturdays, and Sundays, the Flint RiverQuarium’s Imagination Theater presents films on a screen three stories tall. And other ongoing programming, such as dive shows, alligator feedings, and animal presentations, ensures that every trip has something new to offer.

Most importantly, while you’re here, make sure not to miss these fascinating creatures that call the Flint River home!

One look into the alligator exhibit, and you’ll quickly see that one of these is not like the others! Moonshine, a rare albino alligator, has a genetic mutation that makes his entire body white. Moonshine’s body doesn’t produce melanin, the pigment that typically gives color to skin and scales. A 17 pound albino alligator named Moonshine rests submerged in its enclosure at the RiverQuarium. This rare reptile is on loan from the National Mississippi River Museum in Dubuque, Iowa. Photo: Joe Bellacomo

Albino alligators are a rare find in nature as their lack of camouflage causes predators to find them easily. It also makes them subject to sunburn, so you’ll notice a shade cloth in the alligator exhibit to provide some relief for Moonshine.  Fun fact: his favorite food to eat is raw chicken, but he also receives plenty of mackerel for a balanced diet! Alligator snapping turtles are believed to be capable of living up to 200 years in the wild, but 80 to 120 is more likely. Best estimates are that Big Al is probably about 70 years old. This turtle’s most distinguishing characteristic? Its worm-like tongue, which it uses as a decoy to lure unsuspecting fish. When they come close, the turtle SNAPS its powerful jaws shut, securing its prey!

Like many of the native and migratory birds found in the Flint RiverQuarium aviary, Kevin, a Great Blue Heron, is a rescue and rehab bird. He came from a rehabilitation facility in Tennessee after being rescued when he was injured and entrapped in hurricane fencing. And after several months of treatment, Kevin couldn’t be released into the wild. He is shy with people, but has a comfortable and safe home in the Flint RiverQuarium aviary.

The Great Blue Heron is the largest heron in North America and can grow up to 4 1/2 feet in height with a wingspan of more than 6 feet. In the wild, the Great Blue Heron feeds on fish and other small animals found in and around the water. When foraging, it stands silently along the shore, waiting for prey to come by, then STABS the prey with a quick lunge of its impressive bill!

An impressive school of large Gulf sturgeon, ranging from 4-6 feet long, make their home in the 175,000-gallon, 22-foot-deep recreated blue hole spring exhibit, which is the centerpiece of the Flint RiverQuarium.

The Gulf sturgeon, also known as the Gulf of Mexico Sturgeon, is an “anadromous” fish. It inhabits coastal rivers from Louisiana to Florida during the warmer months, and the Gulf of Mexico and its estuaries and bays in the colder months.  Living up to 60 years, Gulf Sturgeon are bottom feeders, and primarily eat macroinvertebrates, including brachiopods, mollusks, worms, and crustaceans. Gulf sturgeon once spawned in the lower Flint River, but the construction of the Woodruff Lock and Dam at Lake Seminole in the 1950s stopped the annual migration. Although no longer found in the Flint River today, they’re included in the exhibit to demonstrate the possible results of man’s interference in nature.

The Gopher Tortoise, Georgia’s state reptile, is native to the southeastern United States. Known as a keystone species, it’s a critical member of the environment because the burrows it digs for itself also provide shelter for more than 350 other animal species.

The Gopher Tortoise is a large terrestrial turtle with features that are common to most tortoises, including front legs well adapted for burrowing with scales to protect itself while digging. Malcolm found his way to the Flint RiverQuarium when a local citizen discovered him repeatedly digging in her garden! Now, he and his friend, Bebe, can be found in the Flint River Gallery. And beginning in late September, they can be found outside in a new gopher tortoise enclosure in the Golly Gee Garden. Next up is the MAPS Air Museum located on the west side of the Akron/Canton Airport just three miles off Interstate 77. Doug Perry, Army veteran and museum volunteer, shares some important history and information about this internationally-known museum of aviation.

MAPS Air Museum is housed in an old Air National Guard hangar and service buildings. And our motto is “Where History Takes Flight.” Our mission is to educate the public of the history of aviation and its impact on man. To accomplish that mission, we acquire, restore, and display aircraft and memorabilia associated with aviation.

As we’ve grown, we’re expanding into other areas of military history. We also work to honor our veterans. Reason being, the majority of us here who volunteer our time are veterans. We’re putting in around 58,000 hours a year to maintain this historic installation.

In the 1950s, the Air Guard flew several aircraft from this location, including P-51s. And in the 1980s, the Army Ohio National Guard flew helicopters from here. In fact, the Army Ohio National Guard has new facilities just over the hill from us now. So we work with them as they hold many of their ceremonies here. We also support their pantry for those struggling to make ends meet.

The museum started in 1990, however, with one aircraft and currently has over 50 aircraft. We have several rare aircraft here and a couple that you will not see at any other location.

For starters, we have the Martin Glider built right here in Stark County in 1908, one of only six B-26

Here, you’ll also find an Army Field Hospital, which is owned by one of our volunteers who served as an

Army Medic with the 82nd Airborne and 1st Infantry Division in Vietnam. Not to mention, we currently have two museum galleries in which we have over 130 displays of historical artifacts.

Our museum is a War Memorial location in that we display a piece of Battleship Arizona. We also honor those who served in Korea, have a “Tree of Lives” that honors those Ohioans we lost in Vietnam, as well as a “Fallen Feathers” Memorial of Ohio to honor all those Ohioans that have been lost in Iraq and Afghanistan.

Looking to the future of our museum, in the coming months, we’ll open a 300-person conference center. And in a couple more years, we’ll have a third gallery, which will allow us to expand to well over 200 different historical displays. Additionally, we’re looking to have two more buildings to house more aircraft and military vehicles.

Beyond the Blue Star Museums season, active-duty military personnel is always free as are World War II veterans. As I often say, “Come for the Aircraft – Stay for the History!”

Lastly, Lisa Timmerman, the Executive Site Manager of Historic Dumfries Virginia, Inc., shares the ten reasons why you should add The Weems-Botts Museum to your list! 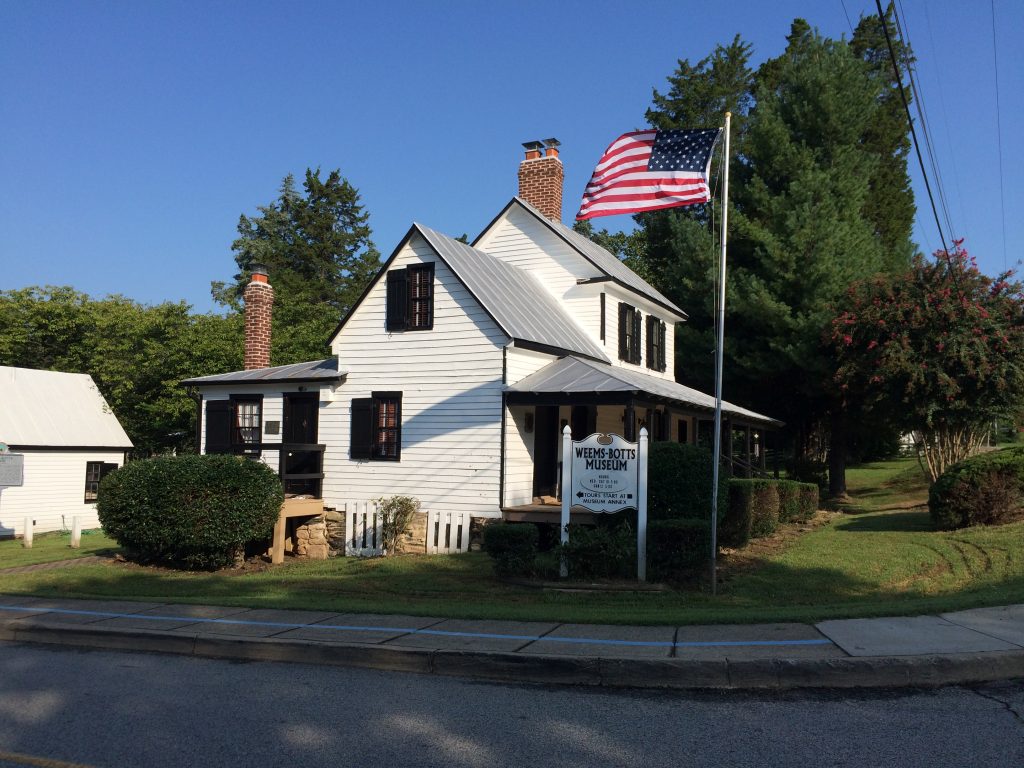 1. You’ll travel back in time.

Our historic structure was built in the 1700s and used until 1968. As we walk through the historic house, you’ll pass into the Colonial, Victorian, and WWII era as we discuss how such a small building could be used for so much!

Unlike Mason Locke Weems, the owner of the historic structure in 1798 and the first biographer of George Washington, we will tell you the truth about the first president of the U.S. and the cherry tree.

Yes, the Archibald Henderson. Although the house he grew up in as a child is currently a private residence, our tours discuss the unique history of the house as we walk by the structure.

You can have lunch in our 2-acre park or even play on the playground next to our gazebo and pavilion. While larger parties can rent this space out, guests are always invited to enjoy the hidden treasure that is Merchant Park.

5. You can pay respect to the dead.

Take a tour of the historic cemetery dating back to the 1600s. From soldiers to the enslaved, the community of Dumfries still remembers those who came before them.

6. You’ll get a craving for seafood.

Dumfries used to be a port town in the 1700s, and you can literally see how our early Virginians slowly destroyed our nautical prowess. Don’t like seafood? Ask me about the cows in the 1900s, and switch your craving to dairy and burgers.

7. It’s easy to get here and put the world on pause.

Although conveniently located next to I-95 and Route 1, you’ll feel like you stopped in a quaint town far from the stress and headaches of traffic!

8. You can scare yourself silly before visiting.

Although we only discuss our haunted lore in our famous October evening Ghost Walks, you can view videos from different television companies that visited our property, like A&E’s A Ghost Story or The Dead Files.

9. You’ll be close to Quantico Military Base.

Many of our volunteers and members of the Board of Directors are Marines! We truly appreciate the sacrifices made daily by our country’s soldiers and their families, and we feel honored to be a Blue Star Museum.

10. We offer free programming throughout the entire year.

Beyond the Blue Star Museums season (Armed Forces Day through Labor Day), our complementary programs and low rates mean your family can afford a museum trip year-round. Yes, without having to budget the rest of your day.

If you don’t know about them already, there’s no need to be embarrassed! It’s a common question we get as Dumfries is the oldest chartered town in Virginia. For more information on Historic Dumfries and The Weems-Botts Museum, visit historicdumfriesva.org, sign up to receive their free e-newsletter, The Town Crier, or check them out on Facebook. Plan on visiting one of these museums soon? Don’t forget to share your experience on social media using the hashtag #BlueStarMuseums!

And to stay in-the-know on Blue Star Families’ programs like Blue Star Museums, become a member for free today! We can’t wait to welcome you.